Behind the Wreath: Esther 4:14

What God Is Teaching Me: Community »

Of all the women in the Bible, Queen Esther was the one I could relate to the most when I was growing up. I was fearful and shy. I hated being alone and the darkness. I was so nervous talking to people and expressing what I wanted. I was small, felt small, and Queen Esther seemed to understand that.

Esther was forced into a situation and role that she wanted no part of—she became queen when she was trying to mind her own business. THEN her cousin was like “Esther. Your friends, your neighbors, that kid across the street—dead. We’re all going to die pretty soon, so… can you help us out? Talk to that husband you got two weeks ago and tell him to lay off.”

In that time and culture, women were called to be arm candy and that was it. It was monumental for Esther to approach the King without an invitation and ask a “favor” from her. And if the king was in a bad mood, she was going to die.

Esther had great reason to be nervous and afraid. She was about to do a big, bold, scary thing that no one in her country, culture, or history ever accomplished and lived.

She tried talking herself out of doing it—who wouldn’t? And the same cousin that gave her the news told her this:

“Esther, maybe this is the reason why you’re here.”

She mustered her courage, talked to the king, and saved her people.

She did the hard thing.

When she had only one person supporting her… when he was able to talk to her. There was no instant messaging or emailing, and he had a full time job.

When she was one in a thousand in a palace and knew no one else.

When she had no idea if it would work out—it was a huge risk!

When she knew this might be the last thing she does on the earth.

She did the hard thing.

This piece is so special to me because it’s from Esther’s book. It’s from my childhood hero. It’s not something she said that inspired me, but what was said to her:

“Who knows if you became queen for such a time as this?”

I need to be asked this.

Who knows if I was put into this sucky job role for such a time as this?

Who knows if I was put into this marriage rough patch for such a time as this?

Who knows if I was given a business to lead and tend to for such a time as this?

Who knows if I was given this role and responsibility for such a time as this?

We, in our limited knowledge, can only guess why, but we’re not left alone to wonder and over think. We’re challenged to move forward knowing that God is orchestrating everything for His kingdom and Name. God ultimately knows our situation and the reasoning behind it. He knows exactly what’s happening in our lives and why.

When painting this piece, I knew the floral element needed to represent a queen.

Often I’ll search bouquet arrangements and floral wreaths on Pinterest to get a better understanding of actual flowers. Before selecting the verse from Esther, I had a Pin obsession with the protea flower. This “crown on a head” type flower is often the focal point of the bouquet, and plot twist: there’s a King Protea flower and a Queen Protea flower. These protea pins were kept safe for when the right verse came to mind.

What better way to illustrate a challenge from Queen Esther than to use the Queen Protea flower?

Maybe you’ve thought what I did: “Why am I here right now? I don’t enjoy this. This is difficult. I don’t have any support. I’m doing this alone. I’m not at all equipped.”

But maybe you were placed in that role for a specific reason? Maybe those days were you show up when you don’t want to are making you stronger and stronger for the real challenge. And maybe you are equipped to handle this responsibility.

Because God has not left you, and He knows the beginning, middle, and end of your story.

Do you know someone who may be wondering the same thing? Who comes to your mind? You can encourage them with Scripture.

“Who knows if perhaps you were made queen for just such a time as this?” —Esther 4:14 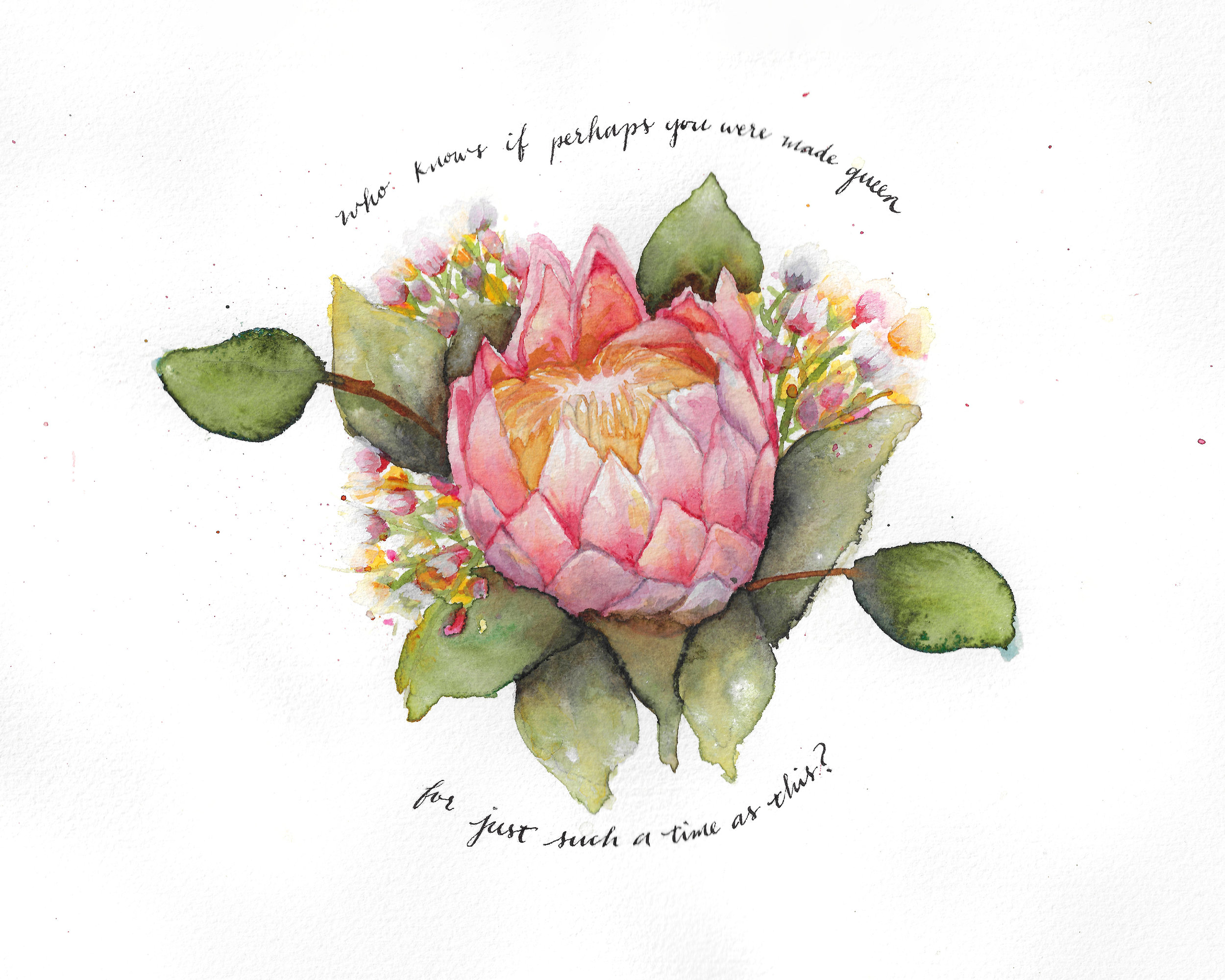